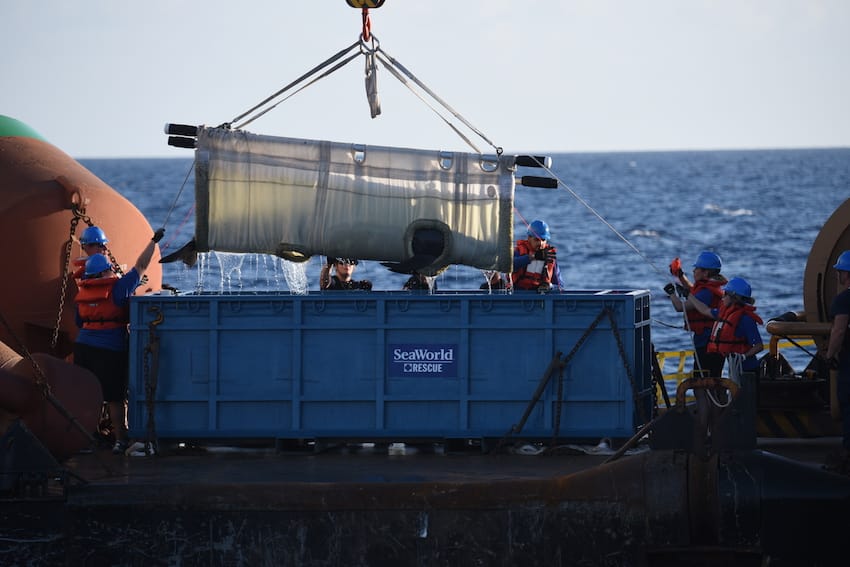 SeaWorld successfully does it again by returning a Pilot Whale (that had beached it’s itself back on the 1st of July) back to sea.

You know, it amazes me that there isn’t more press about this or all of the other great things that SeaWorld does for the marine life, birds and for other animals in our country and around the world.  I certainly wish people focused more on this kind of stuff, rather than some crappy, highly exaggerated and mostly false movie that came out a few years ago.  SeaWorld does GREAT things and the story below proves it!

A female short-finned pilot whale has a second chance at life after an extensive and complex return to the sea. The 725 lb. whale beached herself in Dixie County, FL on July 1. Discovered by beach goers, rescue teams from the University of Florida and Clearwater Marine Aquarium assisted the whale and transported her to SeaWorld Orlando for continued medical intervention and rehabilitation.

Upon arrival, the pilot whale began to receive 24 hour care from SeaWorld’s dedicated veterinary and animal care teams. Everyone had the goal to release her back to the wild and through ongoing care and laser-focused attention, along with regular input and evaluation from NOAA and the partners in the Southeast Region Marine Mammal Stranding Network, the release became a reality.

The pilot whale responded well to her treatment and began to show signs of improvement almost immediately. Upon arrival, she was able to successfully swim on her own and within one day, she began to eat fish.

Together with NOAA, the SeaWorld team made arrangements to return the pilot whale to the sea. Plans were made to release her 140 miles off the West Coast of Florida in an area of known pilot whale habitat. Pilot whales live in deep water and are social animals that travel together in pods. The release spot will give her a good chance to join other pilot whales.

To ensure the pilot whale was returned safely and carefully, the U.S. Coast Guard assisted with the complex transport. The crew of the Coast Guard Cutter Joshua Appleby, along with a team of five members of SeaWorld’s rescue team, worked together on the multifaceted mission. On Tuesday morning, August 8, the pilot whale, nicknamed “Gale” by the crew of the Joshua Appleby, was successfully returned to the Gulf of Mexico.

“We all watched her strongly swim away,” shared Dr. Lara Croft, veterinarian, SeaWorld Orlando, who escorted the pilot whale through every step of her rescue journey. “This story has been a true collaboration and we worked together with many dedicated partners. We are proud to be a part of this rescue, rehabilitation and successful release. This truly is why we all do what we do.”

Prior to her release, the pilot whale was tagged with a satellite-linked transmitter by researchers with the Chicago Zoological Society’s Sarasota Dolphin Research Program. The tag will allow researchers and rescuers to follow her movements and dive patterns for the next several months.

Pilot whales, are members of the dolphin family, and are second only to killer whales in size. Short-finned pilot whales are found worldwide in warmer temperate and tropical waters. Pilot whales are extremely social, and are well known for mass stranding in groups of a few animals to several hundred at a time.

NOAA encourages people to report sightings of dead, injured, or entangled dolphins and whales to the Florida Fish and Wildlife Conservation Commission at 1-888-404-FWCC (3922).