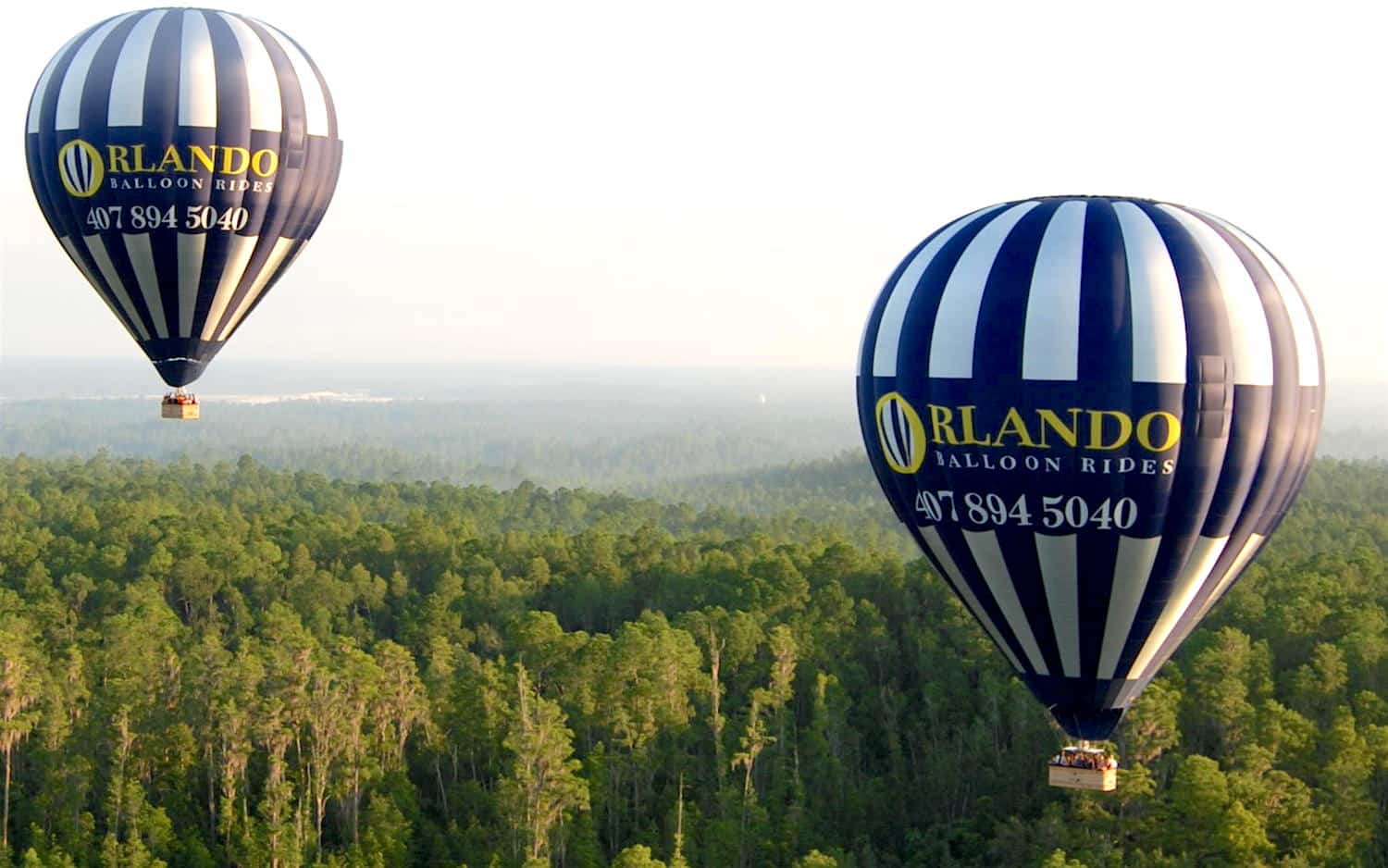 Have you ever been in a hot air balloon?  Is it on your bucket list? Does the thought of a hot air balloon ride make you nervous?   I am here to tell you that if you have never been, do it!  If you have, do it again! The people at Orlando Balloon Rides have got the talent, the experience and can sure make it happen! 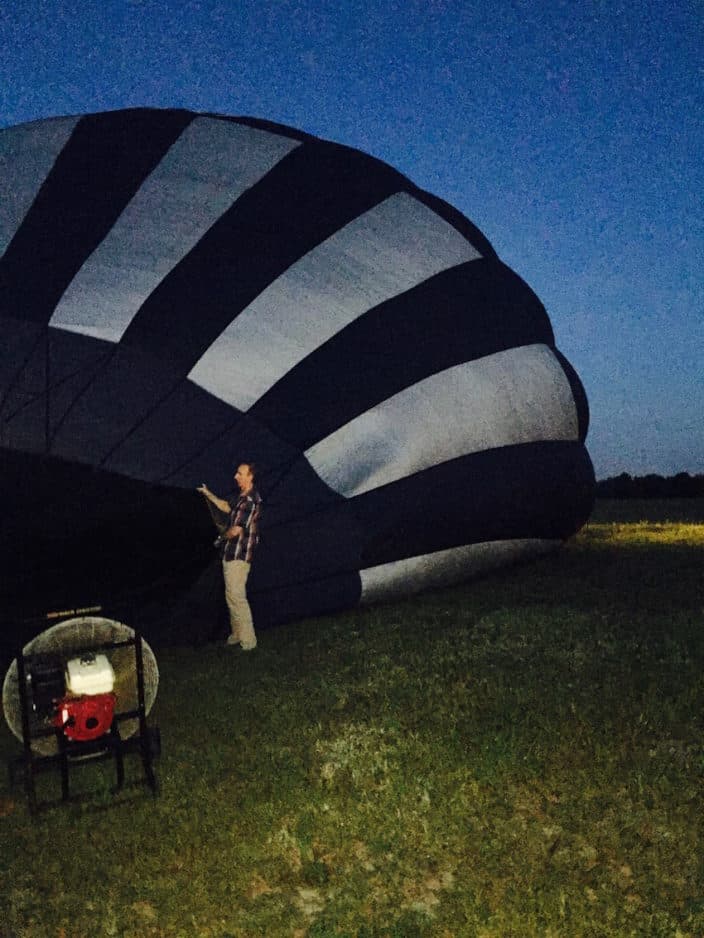 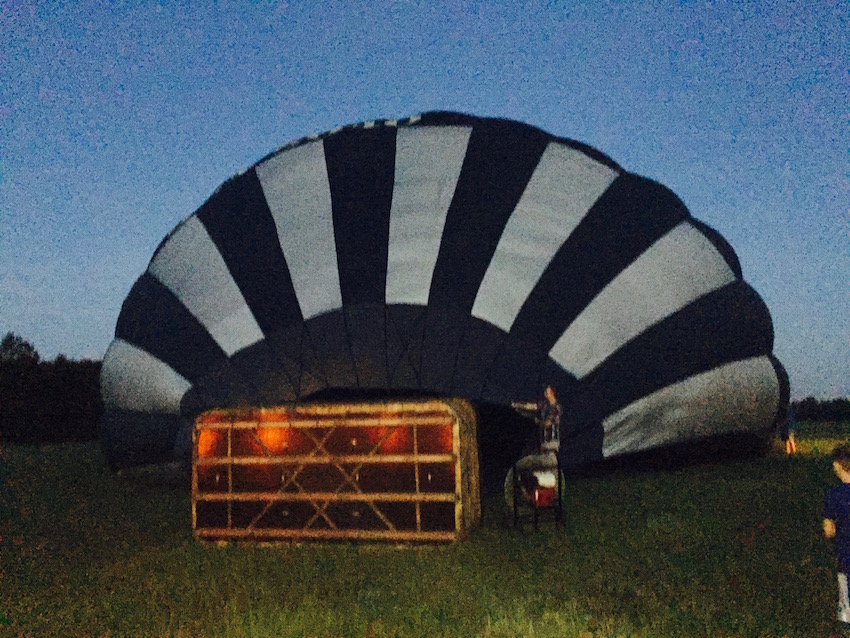 Living in South Clermont, my son sees the hot air balloons fly over our house on occasion and has been begging me to take him on a flight for a long time.  I always put it off, as I am not a big fan of heights, and the thought of being that high up in a hot air balloon made my head spin. But I FINALLY put my big boy panties on booked our flight.  And here is how it went… 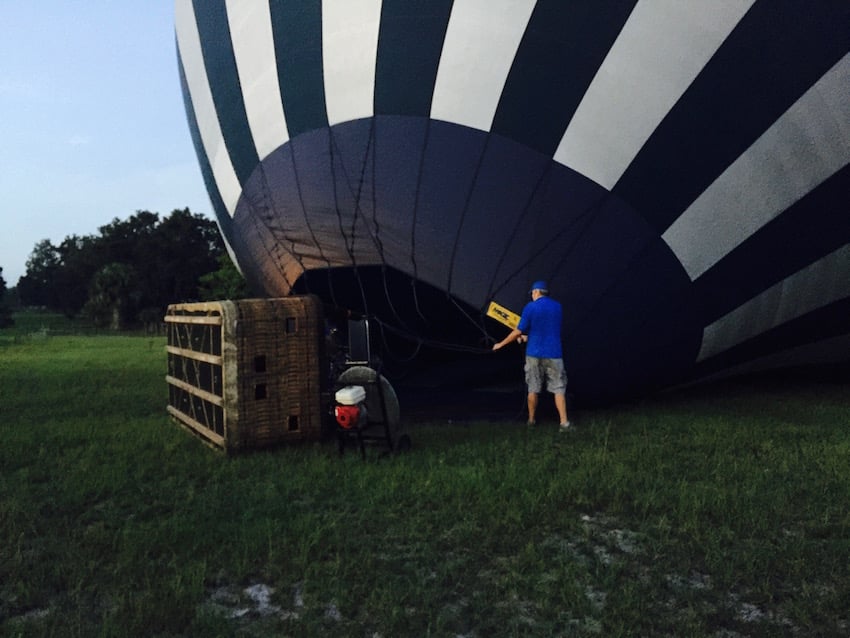 The day of our flight came.  Logan was excited and I was nervous, so we were up early and ready to go by 5:30am.  We had to be at the office of Orlando Balloon Rides  no later than 6AM, and we arrived just a few minutes before that.  Once inside the office, we were greeted by a very nice receptionist who had us fill out our waivers and gave us a few last minute instructions.  There were a couple other families there as well, patiently waiting with us.  At exactly 6AM, they loaded us up in their vans and we headed out to the launch site.  The launch site is determined by wind directions and speeds and can be different on a daily basis. 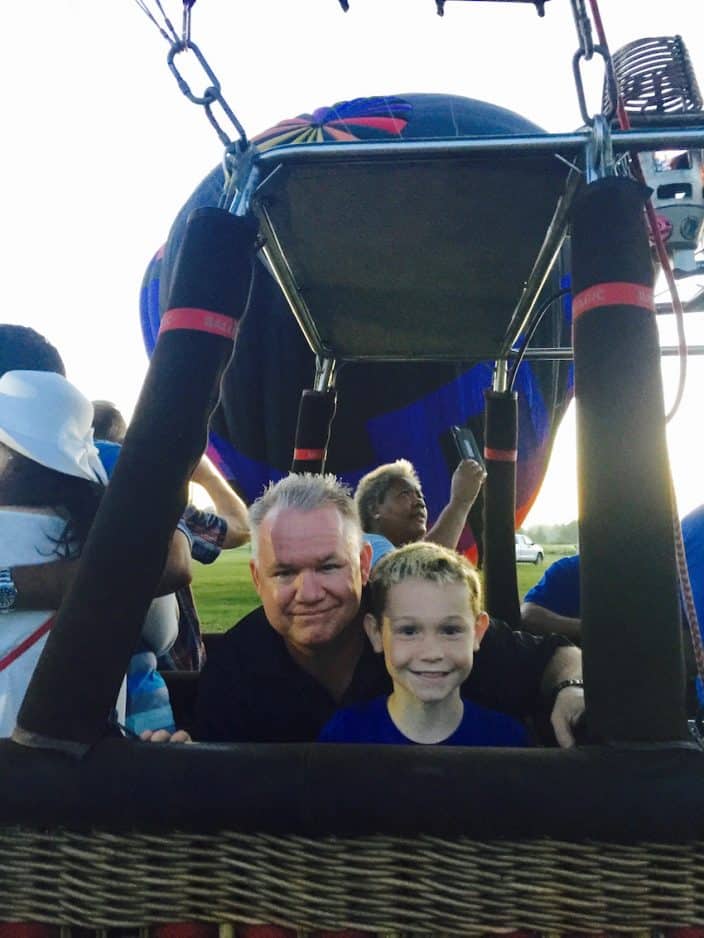 Once we arrived and exited the vehicles, we watched as they used 2 huge fans to inflate the balloon.  I notice that the field that we were at quickly began to fill up with other balloon companies and private ballooners.  It was quite a sight to see all of the balloons being filled at the same time. 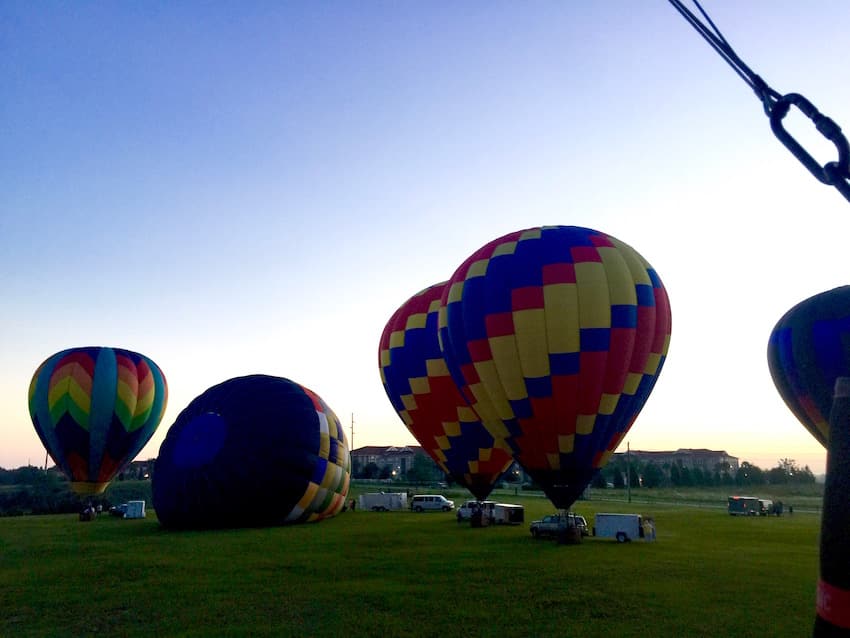 Then our Orlando Balloon Rides pilot (Mark) introduced himself and he gave us some last minute instructions on how to get in the basket, what happens at take off and how to prepare for landing.  He was a very funny guy and made all of us feel comfortable. 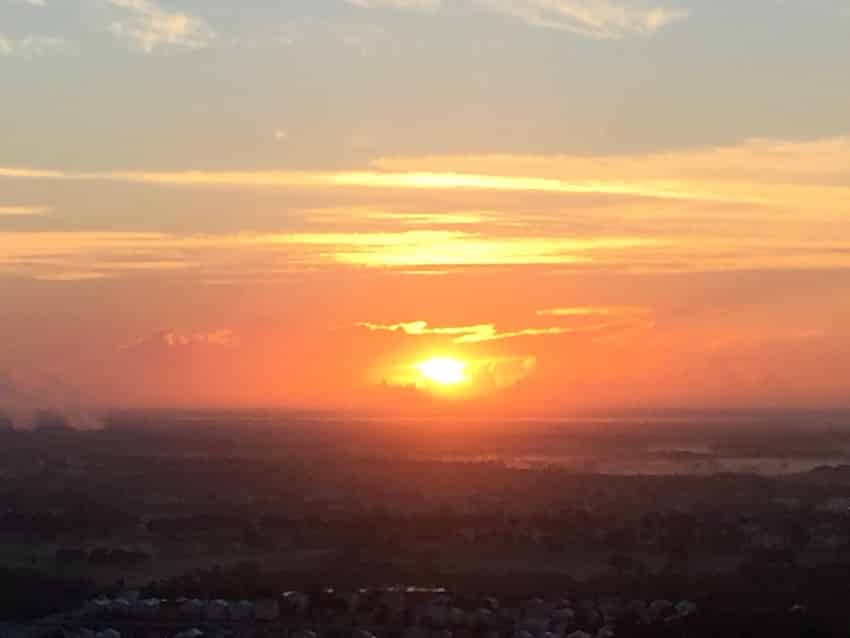 My son then noticed a small blue party balloon that was released into the air.  Our pilot told us, they do that to test wind speed and to see exactly which direction we will go on lift off.  I immediately thought, with all the technology we have today, it’s amazing that that was still the best way to judge how our flight will begin.

Once the balloon was almost completely inflated they lit the burners and started adding the hot air.  Wow!  What an awesome sight, as the blue flames lit up the early morning sky. 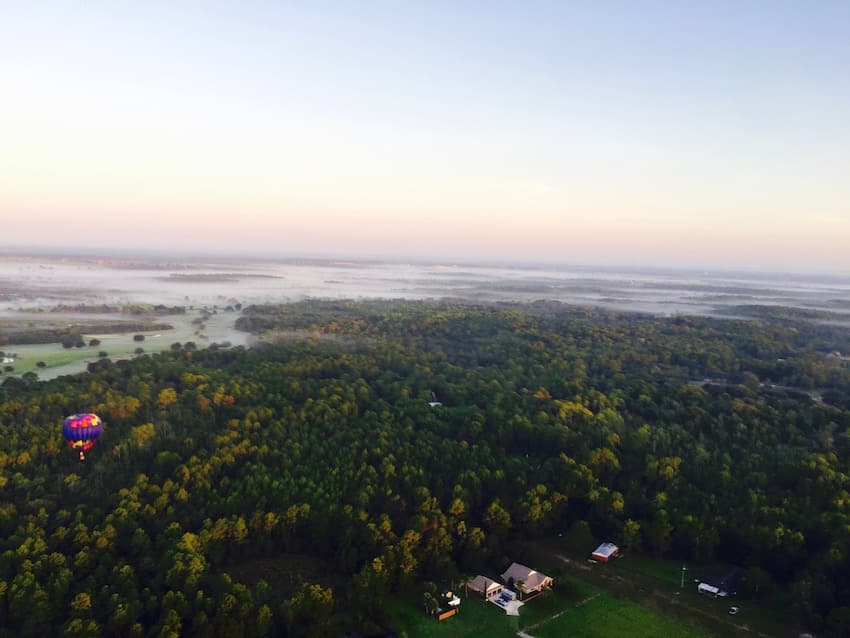 We were then asked to load up.  The basket was much bigger than I expected.  I helped Logan climb in and then climbed in myself.  The basket held all 12 of us plus the pilot.

The take-off was very smooth, nothing like I had expected.  We literally just lifted off the ground and up we went.  I didn’t even know we started until I looked down and realized we were about 5 feet off the ground.  As we got higher, I looked back to see that most of the other balloons were lifting off as well.  It was such an awesome sight.  It was then I noticed the sunrise.  Absolutely gorgeous!  It was a view I won’t soon forget. 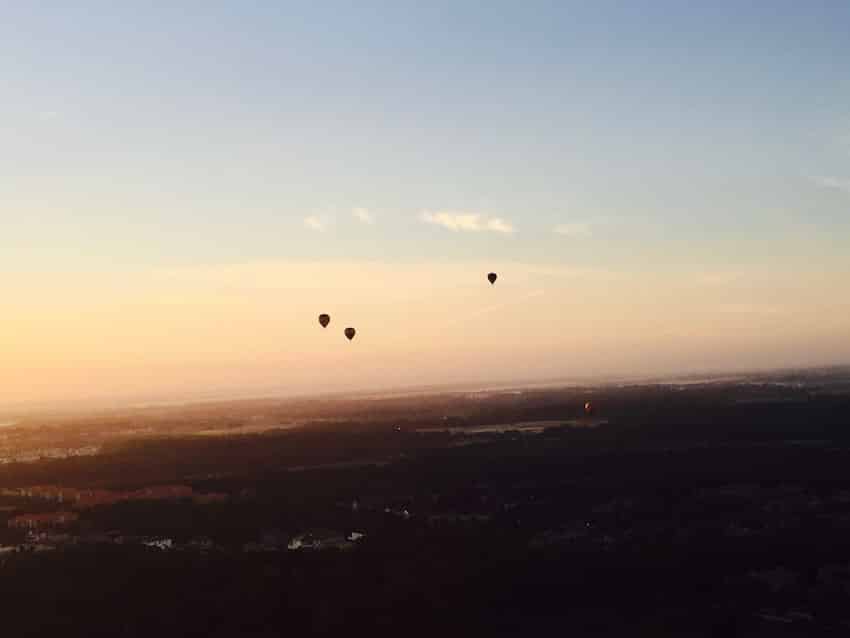 We maxed out about 530 feet and continued to just float peacefully through the air. 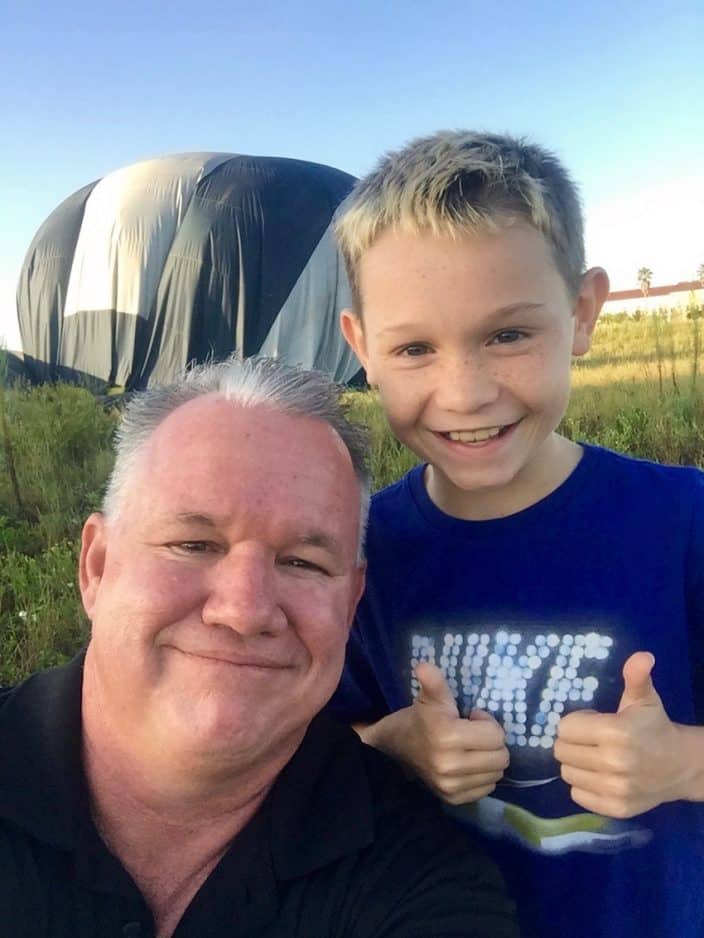 Looking down we could see housing developments and many lakes and ponds.

“Dad, look at those cars, they look like ants.”   Logan said.

And he was right, they did look like ants.  We crossed over Interstate 4 and there were lines of ants scurrying around.  Our pilot, explained to us that Interstate 4 was a magical highway.  He said at right around 5pm every night the highway magically turns into a parking lot.  Ha!  You got that right!

Then there was the wildlife.  It was a cool sight to see birds flying underneath us.  That is something you don’t see every day, the top side of a bird in-flight.  Down below we saw deer, cows and just before we landed we saw a large fox run across an open field.  Again an awesome sight to see!

As we started our decent towards the landing site, the wind picked up a little and we moved faster.  It was then I realized just how much control our pilot had of the balloon.  He raised us up just about 20 feet and we slowed down a bit.  He then looked forward and said, I am going to put us down right in the clearing.  And that he did. 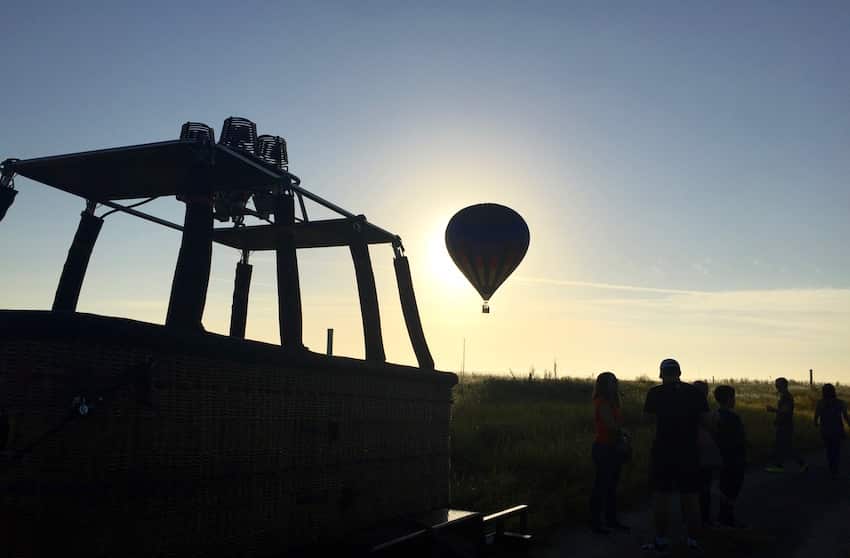 The landing was a little rough.  We bumped the ground, lifted up, bumped again and then came to a stop.  Our chase crew met us right there.  I thought it was cool, as the pilot lifted us just off the ground and the chase crew pushed and pulled us and put the basket right on the trailer before we even got out.  How is that for service! 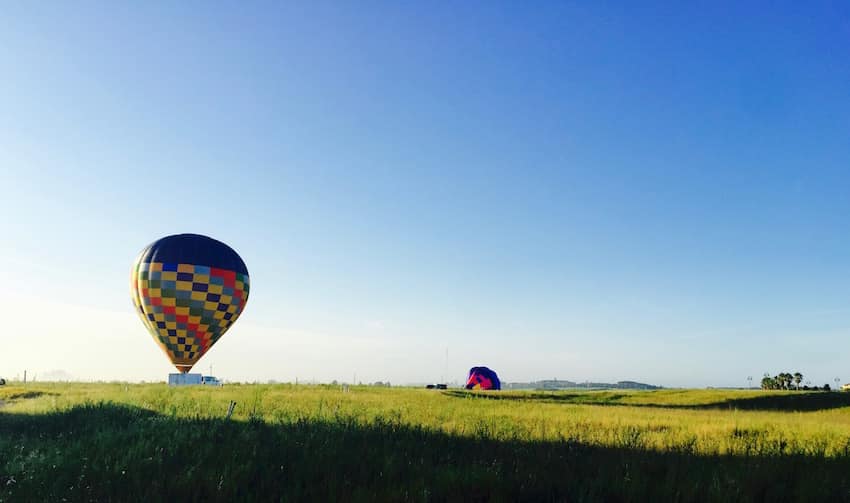 We hopped out of the basket and watched as they packet everything up.  We even got to assist with packing up the balloon.  It was interesting to see how it all broke down and how efficient they were at it.

After everything was put away we all gathered around the vans.  It was then they brought out the huge bottle of champagne and orange juice.  We learned that it was customary after a balloon flight to have a champagne toast and to state the balloonist prayer.  And that we did!

It was such an awesome experience.  I would highly suggest that everyone do it at least one time in their life!  And to help with that, ShareOrlando.com is giving away a FREE Hot Air Balloon Ride for 2 via Orlando Balloon Rides to one of our lucky readers.  Click the image below to sign register to win. 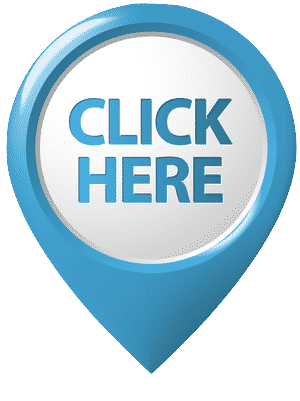